How I ruined it. 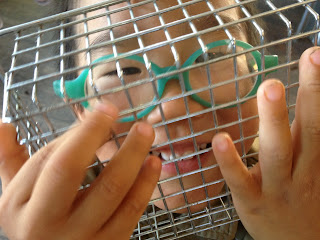 On Thursday of last week YH, Miss A and I found ourselves at a theme park in a neighboring city, getting ready to film a commercial. (I know. Whaaaa? It is a long story.)

As it turned out, things were running on a schedule different from the one we had prepared for and Miss A was required to be on-set, waiting, until after midnight. I am sure I don't need to tell you that this is far from the normal schedule of events for any of my children, much less the toddler.

And so I found myself "parenting with connection" a heavily over-stimulated, dysregulated, neurologically compromised three year old in full view of a few hundred strangers for over THIRTEEN CONSECUTIVE HOURS. It took every scrap of energy and focus that I had.

My friend Anna talks about "steering into the skid" when parenting our kids from hard places. By this she means reaching out to your child in the midst of the hardest times, the hardest behaviors, instead of closing him/her out. This takes so much work! It is much easier, and less taxing, to send a child in the middle of tantrum to "the thinking step" than it is to get on his/her level and *engage* in the resolution of the hurt and icky feelings.

I try my hardest to steer into the skid whenever I can; and I steered into it big time on-set. In a way, it was beautiful. YH and I connected in a deeper way; of that I am sure. I met his every single need over the course of that day. I helped him find a quiet place when he needed to regulate. I engaged in creative play with him, I sang him his favorite songs, I carried him in the dark, I helped him find words for his frustrations.

His brain didn't let his body turn-off for one second. No nap. No falling asleep in my lap. He was set to "GO"; alert and tense every minute that we were in the new location. When we finally stumbled to our car in the deep of night, he fell asleep almost instantly.

I wish I could catalog for you the tiny gains in attachment we achieved that day: how he effortlessly sprawled across my lap, lying on his back and whining half-heartedly while staring into my eyes (this from a child who *never* lies fully prone in my arms). The way he would return to my side every few minutes, patting my cheek or back to say "Hey! I'm happy I found you right where I left you!" The way his anxiety behaviors stopped the moment I scooped him into my embrace, and the way his little body softened against mine.

I returned home exhausted, but marveling at our strengthened connection. I was thrilled that progress is still being made; that my patience extended long enough to meet YH where he needed it most.

I was proud of myself.
And we all know where pride goeth....

And so, the next morning I promptly wrecked it all.

You see, Miss A had an early call-time for the commercial so we slipped out of the house before YH awakened. Sean and Sweet Bubs were set to head to the beach for the weekend--with YH, of course, but not with his full knowledge of what would transpire. No one had taken the time to explain to him that Miss A and I would meet up with them later, after her work was done.

And so my lovely boy awoke later than usual, with a heart still sore from the re-knitting of the previous day, to discover that his mom and sister had disappeared.

And then he himself left the house! With a packed suitcase! And only his dad and brother! And they drove far away and set up house in a new condo! The new place smelled nothing like "home". The schedule was different. And mom and sister were missing!

Because he is a trooper, and because he has been through this loss before, YH flipped into "busy" mode. He swam with abundant energy in the pool. He powered through dinner and exploring the touristy souvenir shops. He ate ice cream with abandon.

At bedtime, he fought sleep. He cried and fussed and asked for me over and over.

I did not come.
I was not there when he woke up the next morning.
I was not on the beach, holding his hand in the waves.


The following night I *was* there. Miss A and I arrived (again) after midnight. We left minutes after wrapping the shoot and drove on lonely country roads to find our boys. My daughter and I tumbled into bed together and slept heavily until mid-morning, when the joyous stampede of little boy feet let us know the brothers were awake.

I walked out into the living room, overjoyed to see my sons, and was summarily given the cold shoulder by YH.

He was MAD.
With good reason.

And over the next hour he raged. He thrashed and screamed and fought my embrace. He cried and kicked and nothing made him happy. We sat together on the floor of the closet in the rented master bedroom. I rubbed his back and told him I was sorry he was angry. I told him I loved him and that I always come back.

And I waited.
And I beat myself up over not anticipating that this would happen.

Once YH had finished his tantrum, we went about our day together at the beach. We built sandcastles and splashed and ate in cheesy restaurants.

Did I really ruin the connection we had forged earlier in the week? No, I don't think so. But I did inadvertently test the boundaries of my son's burgeoning trust.

Nora
Just a lady. Raising some kids. Wearing some shoes.