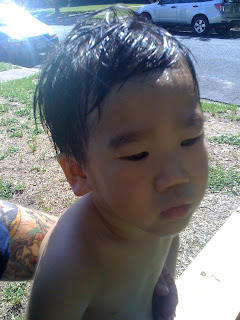 Today his eyebrows remain just as wonderfully fuzzy, and his cheeks are still endlessly kissable. He is still sturdy of frame, with broad shoulders and a sculpted waist. His feet remain wide and plump, tethering him to the earth. His head is still slightly lumpy, though I notice it less and less. He has a dark blue birthmark on his right upper arm, and two more on his lower back.

It kind of kills me to look at that picture. To see my son's small face so closed off, so sad. To see his shoulders hunched in defeat, his mouth soft and tugged by sorrow.  He is leaning away from his papa's hand, trying to get away from this new set of circumstances. He looks bewildered and broken-hearted.

And to my memory this photo was taken on a good day! The night before YH slept tucked in my arms. He woke up and ate a bowl full of berries and cereal for breakfast. We played in the front yard and filled up the baby pool for him to splash in. We had fun!

And yet the camera captured this moment of quiet pain. I can't imagine what it must have felt like to him to have his whole world disappear. To be plunked down in the middle of Texas in the bosom of a well-intentioned-but-generally-clueless family. It astounds me that he had the strength to grieve and begin the healing process. That he was able to begin to trust and love us.

YH and I talk a lot about love these days. Mostly about how much I love him and how that will never ever change.

Throughout the day he will stop what he is doing and ask me to tel him a YH story. This is a special type of story that I made up just for him.

We sit down facing each other on the sofa and lean in so that our foreheads are touching. He wiggles in excitement as I begin.

"Once upon a time there lived the most wonderful, smart, brave, silly and lovely three year old boy in the whole wide world--and his name was YH."

(we say his name together, and he collapses in giggles after saying it)

"One day YH woke up early and ate bacon and eggs for breakfast. He gathered up his favorite toy cars and kissed his mama good-bye before heading off to school. While he was at school he learned new things and played with his friends. And the whole time his mama loved him, even though they were apart."

"At then end of the school day his mama came back. Because she promised she would. And she was so happy to see YH that she gave him a big squeezy hug. And they went home and ate lunch together. And YH's mama loved him, because she loves him forever and ever and that will never change. The End."

The details vary with each incarnation, but the framework remains the same.
YH loves these stories and never tires of hearing them.
I love that he loves listening to them.
It is such a simple way to share with him how important he is to me, and to our whole family.

I haven't seen the look of quiet pain on YH's face for quite some time now. That doesn't mean that the pain isn't there--just that he doesn't wear it prominently in each picture.

Photos taken now are more likely to capture his wide grin as he slings an arm around his brother, or proudly displays his climbing prowess.

This past year was just the beginning for YH and me. Each day I wake up a little more in love with him, and a little more eager to see what we'll discover about one another.

I love you YH, and that will never change.

Nora
Just a lady. Raising some kids. Wearing some shoes.